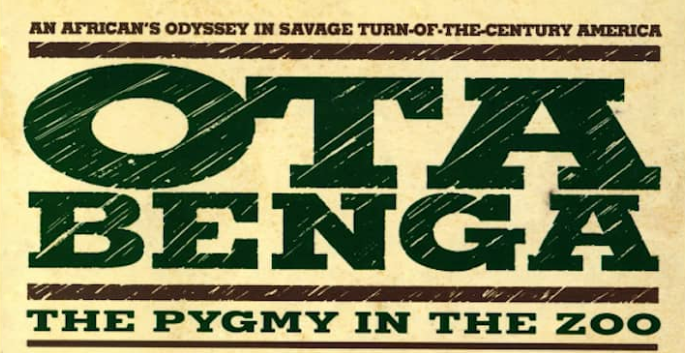 In the early twentieth century, a human was exhibited in the same cage as monkeys in the Bronx Zoo. The Monkey House, also known as the Primate House, was a popular location at the zoo. It once housed grey-handed night-monkeys and apes, including a famous orangutan named Dohong. However, due to economic constraints, the Monkey House was closed in February 2012, one hundred and eleven years after it first opened its doors in 1901. It was in the now-closed Monkey House that the degradation and dehumanization of an African pygmy took place. This writer learned about it from Ota Benga: The Pygmy in the Zoo (St Martins, 1992), co-authored by Phillips Verner Bradford and Harvey Blume. The dehumanized pygmy’s name was Ota Benga.

The story of Ota Benga is as sad as it is educational, instructive, and true to life. Phillips Verner Bradford, co-author of the abovementioned book, is the grandson of the man who was instrumental in bringing Ota Benga from Africa to be eventually exhibited in the same cage as the apes in the Bronx Zoo in 1906. The book takes pains to clarify that Bradford’s grandfather, Samuel Phillips Verner, a white American, was not a racist, but a true friend of Ota Benga, the black skinned African pygmy. That claim is debatable, based on this writer’s reading of the text and other related documents.

Benga’s story began in the Congo Free State in Central Africa in 1904, which was owned by King Leopold II of Belgium. Leopold recruited, or rather forced the Zappo-Zap tribe of Congo to murder or maim any African who did not gather enough wild rubber to make Leopold rich. He had appointed those tribesmen as constables named the Force Publique. Adam Hochschild, in his book titled King Leopold’s Ghost, estimated that ten million Congolese were slaughtered by Leopold’s constables (252).  A Black U.S. Presbyterian missionary named Rev. William Sheppard witnessed some of  these massacres in the Congo and made reports. Bradford cites many of Sheppard’s reports in Ota Benga: The Pygmy in the Zoo because his grandfather, Verner, who was a white missionary, explorer and entrepreneur, worked with Rev. Sheppard.

In 1904, Verner was hired by the Chief of the Saint Louis World’s Fair to go to the Congo Free State to purchase pygmies for the fair’s Anthropology Exhibition. The purpose of the exhibition was to give credence to the evolutionary theory of Charles Darwin. The pygmies were to be taken back to Africa after the fair. Verner bought seven pygmies from the Batwa tribe and later found one pygmy from the Mbuti tribe for sale at a slave market run by the Baschilele tribe. That latter pygmy was Ota Benga, whom Verner bought for “a pound of salt and a bolt of cloth” (Bradford and Blume 103).

When Verner took Ota back to Africa after the fair, they discovered that the pygmy’s family had been slaughtered by Leopold’s men. Ota returned to America with Verner, who was paid by Henry Bumpus, curator of the American Museum of National History, to have Ota stay at the museum to entertain visitors. After a while, Ota became bored and mischievous, so in 1906 Verner pawned him off on William Hornaday, director of the Bronx Zoo. There, the pygmy was placed on exhibition inside the cage with an orangutan named Dohong. Over 40,000 visitors went to the zoo every day to see the pygmy in the zoo. The New York Times and other newspapers spread the idea that Ota Benga was less than fully human. According to Bradford and Blume, whose book includes the New York Times clippings in its appendix, newspapers reporting on the St. Louis Fair also suggested that the pygmies were the “missing link” in Darwin’s theory.

After Black clergymen protested the exhibition at the Bronx Zoo, Verner gave custody of Ota Benga to Rev. Charles Gordon, a New York orphanage supervisor. Gordon sent Ota to Lynchburg, Virginia to live with the McCray family. In Lynchburg, poet Anne Spencer of Harlem Renaissance fame became Ota Benga’s tutor, providing him with a Western education. Ota grew homesick, however, and shot himself to death at age 32 on March 20, 1916 as he performed an African dance for his friends.

Until 1992, when Bradford and Blume published their text, Ota Benga’s story was missing from New York cultural history.  For example, his life mask and bust are exhibited at the American Museum of Natural History adjacent to Central Park, but they are labeled only “Pygmy.” Similarly, he was buried in an unmarked grave in Virginia at the time that Bradford and Blume published their book. 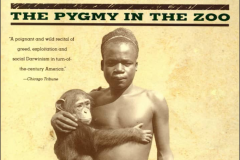 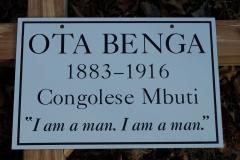 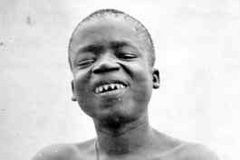 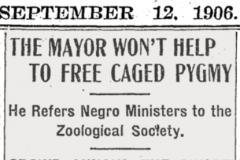 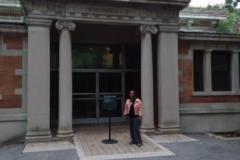 Fortunately, since the publication of Ota Benga: The Pygmy in the Zoo, many works of art, including plays, poems, radio shows, songs, and musical dramas, plus a 2015 biography by Pamela Newkirk, have resurrected Ota Benga’s story.  National Public Radio broadcast a program about Ota Benga in 2006. Interestingly, it is possible to draw links between Ota Benga and prominent literary works. For example, in 1899, Joseph Conrad wrote the novella Heart of Darkness about the murderous evils of colonialism in King Leopold’s Congo; Mark Twain circulated a pamphlet condemning Leopold’s genocide; and Arthur Conan Doyle wrote protests to support the Congo reform movement. Perhaps most relevantly, in a 1922 short story entitled “The Curious Case of Benjamin Button,” F. Scott Fitzgerald wrote an author’s note saying that a remark of Mark Twain’s had inspired the short story. The 2006 movie version of “Benjamin Button” features a character named Ngunda Oti, who informs Button he is a pygmy who had once been exhibited in a cage with the apes at the Monkey House in a zoo. The website FindAGrave displays a November 2011 photograph by Art Wells of a grave marker for Ota Benga, as shown above. Perhaps the American Museum of Natural History should erect a monument in Ota Benga’s honor. And the Bronx Zoo should do the same beside its now closed Monkey House. Public apologies for the New York spectacle of exhibiting a human in the same cage as monkeys would be a decent act by the Bronx Zoo authorities.

A. On September 8, 2006, National Public Radio (NPR) aired a program on the Ota Benga story, featuring people who knew Ota Benga. The program also featured the co-author of Ota Benga: The Pygmy in the Zoo, Phillips Verner Bradford. You can listen to the nine-minute audio by clicking the the PLAY button below. The transcript is available here.

B. For educators who would like to include the Ota Benga story in their lesson plans, the author has created a PowerPoint version of the Ota Benga story. It can be downloaded here. Please let us know in the comments section if you use this resource in your class!