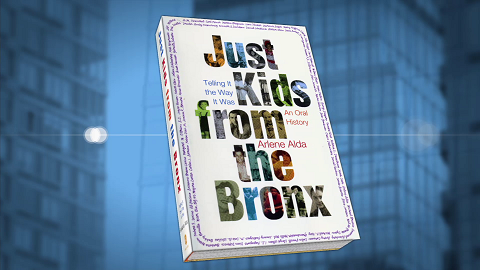 The best people grew up in the Bronx. Okay… maybe that was a bit too broad of a statement. What I meant to say was that the most creative, self-driven, inventive, musically gifted, funny, and successful people were raised in the Bronx. If you don’t believe me, believe award-winning writer Arlene Alda, the editor of Just Kids from the Bronx: Telling It the Way It Was, An Oral History (2015). With this book, Alda, a Bronx native, creatively captures the oral histories of successful people who grew up in the Bronx. The most unique thing about the book is the 60+ different perspectives and experiences shared by people whose childhoods were cradled by the irreplaceable Bronx streets. Alda captures and creates these oral coming-of-age stories by incorporating successful Bronxites from all different eras, neighborhoods, backgrounds, nationalities, and family dynamics; yet, in the end, these oral histories come together to paint a big picture of what it was like and still is to spend your childhood here in the Bronx. While there are many differences that divide these oral histories, the differences also spark some universal truths about growing up in the Bronx that connect all the stories together in some way, shape, or form.

First off, there is the pleasure. And growing up in the Bronx can be a “pleasure”—an idea contrary to media representations of the borough as crime-ridden and dangerous, or a place people just want to leave. By comparing and analyzing the oral histories of these 63 Bronxites and their childhoods, I’ve found a strong connection in all of the stories with joy in having grown up here. Across different eras, the kids went to the same schools, visited the same landmarks and places. Recurring sites include schools such as P.S. 76, the Evander Childs Educational Campus, Theodore Roosevelt High School, and other important places such as Orchard Beach, Pelham Bay Park, the Bronx Zoo, and the Botanical Garden. At the same time, the experiences that each kid shared about these sites help express the Bronx’s multicultural identity. The stories of the different generations of children growing up in the borough reveal to the reader the different ethnic cultures and races that have occupied the Bronx streets and the influence those same streets have had on those Bronxites’ paths and careers.

The book’s editor, Arlene Alda, was born in 1933 in the Bronx. She describes her own upbringing in the book, portraying it as nothing less than an experience that eventually led her to fulfill her wildest dreams, as well as fulfilling her immigrant mother’s aspirations: “This is America. Your life can be better than mine” (66). Alda grew up in the Northeast section of the Bronx between Barnes and Arnow Avenues in a building called The Mayflower. She describes her living situation as a “one-bedroom, one-bathroom apartment. Mother, father older sister, older brother, the mutt fox terrier Spotty and me” (61). Alda was born to Eastern Europe immigrants and grew up in a predominately Jewish neighborhood. She went to P.S. 76, a Bronx school that is still around today. In later life, Alda graduated Phi Beta Kappa from Hunter College and eventually lived out her dream as a professional clarinetist playing for the Houston symphony. A well-respected Bronx-born author responsible for 19 books, as well as an award-winning photographer, Alda currently resides on Long Island. Her inspiration to create a collection of oral histories of different Bronxites came from an interaction she had with fellow successful Bronx native Millard “Mickey” Drexler. During a friendly conversation, the two realized that they had grown up in the same building in the Bronx, “The Mayflower”. Beginning with this coincidence, Alda felt encouraged to feed her curiosity in order to find out what growing up in the Bronx was like for other kids. In the map below, you can explore the interview subjects chosen by Alda and their different Bronx neighborhoods.

Given these are stories of successful Bronxites, and education is often the key to success, many of these Bronx kids speak about the school system in the Bronx, which currently has one of the highest drop-out rates in the region (“Bronx, New York Education Data”). While statistics may paint the picture that Bronx schools are terrible, the actual situation on the ground is more complicated. The astrophysicist, current director of the Hayden Planetarium, and Bronxite Neil DeGrasse Tyson, for example, credits some of his success to his sixth-grade teacher. As he puts it in his oral history, “there was a teacher in the sixth grade who cut out an ad for me about taking classes at the Hayden Planetarium. But it’s not like she said Oh, I recognize that this guy is brilliant. That’s not how it came across. It was Look what he’s doing. Maybe we can find some way for him to invest that energy differently” (212). Tyson goes on to explain that not all his relationships with his teachers were as inspiring as this one. “I was invited back to my elementary school to give a talk. They wanted me to talk about what a great education I had there. I said, ‘I can’t do that. I became what I am in spite of the teacher attitudes about who I was, not because of those attitudes’” (212). Tyson’s story shines a light on how important the affirmation of teachers (and, in other stories, neighbors, parents, and friends) can be to encourage Bronxites to be the best they can be.

Alda’s book is full of success stories, but of course the borough, with its big-city problems, has also spawned many stories of failure. Adrian Nicole LeBlanc’s nonfiction work Random Family: Love, Drugs, Trouble and Coming of Age in The Bronx (2003), for example, offers a realistic retelling of how bad it can be growing up in the Bronx. Within this narrative, we get a glimpse into the main character Jessica’s life as she tries to figure out the ins and outs of getting by in the borough. When the story begins, Jessica is introduced to us as a sixteen-year-old teenager on Tremont Avenue who lived “on one of the poorer blocks in a very poor section of the Bronx” (1). Throughout the book, Jessica barely gets by, relying on her sexuality and Bronx wits, which eventually leads to her being sentenced to ten years in prison, leaving behind her three children to be raised by family friends. Random Family captures and describes the ugliness of how it can be growing up in the tougher areas of the Bronx, aspects which are also present, in places, in Alda’s Just Kids from the Bronx. The actor and author Chazz Palminteri, for example, also depicts the ugliness of what the Bronx can sometimes be. He recounts his childhood by saying, “In my neighborhood, the Little Italy of the Bronx, I saw things. I saw a murder when I was a young boy. It’s what I wrote about in A Bronx Tale. People always say to me, ‘Oh, my God, you must’ve been traumatized and horrified,’ but I really don’t have an answer for them because I wasn’t” (193). By sharing stories about the “bad” side of the Bronx as well as the good, Alda creates a balance in this book, providing a truer account of what it really is like to grow up here.

Bronxites who read this book will find themselves drawing connections with the upbringings of the 63 Bronxites Alda features and will often catch themselves saying, “wow, me too!” Being a Bronx kid myself, I had quite a few of these “wow, me too!” moments while reading Just Kids from the Bronx. I was born in the Woodlawn section of the borough and spent my later childhood growing up in Co-op City and in the Pelham Parkway neighborhood. When I lived on Pelham Parkway, I lived in a seven-story courtyard building on Wallace Avenue that was also home to my aunt and cousins. Before reading this book, I was unaware how common it was for extended Bronx families to live in the same building or neighborhood. One of Alda’s subjects, the Bronxite Mark Cash, for example, born in 1931, remembers his grandparents and aunt living on the same street as he did. On weekends, my mother and aunt would get together and walk me, my sister, and two cousins down the block to the farmer’s market to pick up fresh vegetables and fruits. The Irish-American mystery writer Mary Higgins Clark, who grew up in the same neighborhood as I did, speaks about her family buying food from farmers and experiencing the same warmth and love of the locals that I did. I experienced it in the early 2000s and Clark in the 1930s, but the similarities are striking. There were a lot of stories where I found myself nodding my head in agreement despite differences in age, ethnicity, race, and class.

Less sensational forms of success aren’t highlighted as much as the success stories seen on TV and in pop culture, which is why Arlene Alda’s Just Kids from the Bronx: Telling It the Way It Was, An Oral History is a must read for people who grew up in the Bronx and/or for anybody who wants to experience second-hand how it was to grow up in the Bronx. Alda’s work not only highlights famous names such as Bobby Bonilla, Ruben Diaz Jr., Regis Philbin, Al Pacino and many more, but also brings to light the success stories of normal people like Louise Sedotto, an educator from the Bronx who became the principal of P.S. 76. The importance of sharing the oral histories of regular kids from the Bronx is that it becomes more relatable, genuine, and raw. And to my fellow Bronxites, it never hurts knowing you come from the same borough as a Pulitzer-Prize winning correspondent, the CEO of J. Crew, a multiplatinum recording artist, or an astrophysicist, among many other successful careers. Indeed, it makes you a little bit more prideful about being just a kid from the Bronx.

Alda, Arlene. Just Kids from the Bronx: Telling It the Way It Was, An Oral History. Henry Holt, 2015.

Rowland is a graduate of Lehman College and a future educator. Her hopes are to eventually open up her own preschool in the Bronx. She enjoys reading, yoga, and nature walks in her free time.

Need help with the Commons? Visit our
help page
Send us a message
Skip to toolbar