Orchard Beach, also known as the Bronx or Puerto Rican Riviera, is a man-made beach situated along the Long Island Sound in Pelham Bay Park. It spans 115 acres and is over a mile long with a promenade that allows beachgoers to walk up and down the beach without having to tiptoe on the burning sand on hot days. People who’d rather sit in the shade set up camp on the wide patches of green lawns dotted with picnic tables next to the beach, or under the trees at the edge of Pelham Bay Park, a forested area filled with marshes, swamps and wildlife three times larger than Manhattan’s Central Park. The beach itself is crescent-shaped with a rock jetty on the northern tip that points out to the Atlantic Ocean. City Island can be seen a mile away.

Getting its start in the 1930s when Parks Commissioner Robert Moses invested $8 million to develop the area into a public beach, adding sand from the Rockaways in Queens and Sandy Hook, New Jersey, Orchard Beach grew to become a haven for Puerto Ricans living in New York. “From the 1960’s on,” reports a 2000 New York Times article, “as waves of Puerto Ricans sought new lives in the Bronx, the beach became known to many as the Puerto Rican Riviera. These days, musicians with congas and maracas wail away on the boardwalk, singing Afro-Cuban music, while families lugging containers with garlicky chicken and rice and beans carve out their own terrain among the sea of people who arrive on weekends” (“Slice”). Orchard Beach went through a state of decline during the ‘70s when budget cuts led to cutbacks in maintenance and patrolling, resulting in the beach losing much of its luster, but it has bounced back in the last 25 years.

The beach is quiet during the off-season. Few people linger to take in the view until Memorial Day Weekend when the beach opens and it’s filled with city-folk wanting to escape from the “concrete jungle” and take a cool dip in the water. When they come to the beach, there will be amenities available for them, along with familiar landmarks such as the central pavilion, which holds food stands, and the stage under a white tent that plays salsa music during the height of summer. For Bronxites, it’s their own Cape Cod, but for displaced Puerto Ricans, it serves as a replacement for the home and identity they long for.

“Ode to the Diasporican (pa’ mi gente)” by poet Mariposa (Maria Teresa Fernandez) celebrates the Puerto Rican experience in the Bronx and includes landmarks familiar to Bronx Puerto Ricans like Orchard Beach. A Bronx-born poet born in the early seventies, Mariposa came of age in the epicenter of Nuyorican poetry. She has helped create the tradition of writing works that speak of the Puerto Rican experience in America: “No nací en Puerto Rico. Puerto Rico nacío en mi.” (I was not born in Puerto Rico. Puerto Rico was born in me.) This declaration resonates with many Puerto Ricans who were displaced from the island, and highlights the Puerto Rican diaspora in the Bronx and beyond—Mariposa reveals that this line of the poem has even been translated into German. The poet’s anxiety in “Ode to the Diasporican” stems from her not being labeled a real Puerto Rican because she wasn’t born on the island: “Some people say that I’m not the real thing / Boricua, that is…cause I was born in the Bronx / some people that I’m not bonafide.”

To combat these feelings of displacement, Mariposa equates certain landmarks in Puerto Rico to similar points in the Bronx. She compares the Bronx River to the Río Grande de Loíza, a Puerto Rican river that flows from south to north and joins the Atlantic Ocean (the Bronx River is only half the length of the Río Grande de Loíza yet one can see the similarity between them). She also compares Orchard Beach to Luquillo, a small municipality located in northeastern Puerto Rico with one of the largest marinas in the Caribbean islands, an area popular for beach-going and recreational boating. For native-born Puerto Ricans, they have the original Río Grande de Loíza and Luquillo Beach—and many other glittering beaches—but for Bronx-born Puerto Ricans, Orchard Beach is their Luquillo. They can stand on the sands of Orchard Beach and imagine Luquillo on the island, but this is their own.

Orchard Beach serves as a small yet familiar, reminder of life in Puerto Rico and the memories of families spending their summers at the beach—a home away from home. During the summer, families retreat to Orchard Beach to combat the sweltering heat of the city. A 1973 New York Times article highlights the culture created within the beach by Puerto Ricans living in the Bronx: “[from the] sweltering streets of the South Bronx to the cooling sea breeze, and littered sands of Orchard Beach, … for thousands of Puerto Rican families, the 45-minute, 70 cent subway and bus ride is the only way to beat the heat” (“Orchard Beach on Holiday”). During that era, makeshift food stands and vendors sold authentic Puerto Rican food from green plantains to alcapurria, even though they were issued summonses for selling these foods illegally (“Orchard Beach on Holiday”). This exchange of food was a source of familiarity for Puerto Ricans and served as a reminder of home. Although they were on a beach in the Bronx, they could imagine themselves on a beach in Puerto Rico when they bit into an alcapurria while they listened to salsa music. Salsa music and dancing are a major contributor to the Puerto Rican culture developed on Orchard Beach. They attract crowds year after year—one cannot think of Orchard Beach without thinking of salsa. A stage erected along the promenade showcases bands that play live salsa music all summer. Such traditions have been carried on for generations and continue to this day. 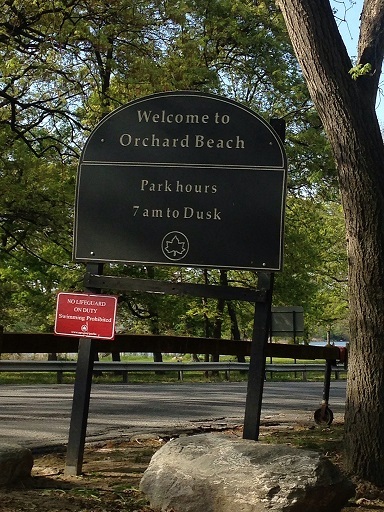 Ever since I was a baby, my mother and my aunt would pack sandwiches, sodas and—when they wanted to go all out—would cook rice, beans, and chicken and pack me and my cousins into the Bx 12 bus to Orchard Beach. A summer would be incomplete without a pilgrimage to the beach. They would sit and tell stories from when they grew up in Puerto Rico while I listened, pretending, like Mariposa, that the beach was my own Luquillo. I burned my feet in the Bronx sand but, in my imagination, I was standing on the sands on a beach on the island and pretended that the murky water was the clear Caribbean Sea. This natal alienation is something I have battled with in the past: my authenticity as a Puerto Rican because my roots stem from my mother and being born in the Bronx, which has caused confusion that has displaced me from my cultural identity. When I’ve asked other Puerto Ricans about Orchard Beach being referred to as the “Puerto Rican Riviera,” every reaction has been the same: people scrunched their face in disgust and vehemently disagreed, not realizing the tongue-in-cheek nature of the comment. I think that’s what Mariposa had in mind when she wrote, “What does it mean to live in between / What does it take to realize / that being Boricua / is a state of mind / a state of heart / a state of soul.” When a Bronx-born Puerto Rican compares Luquillo and Orchard Beach, they want a native island-born Puerto Rican to know that it cannot compare to Puerto Rico, but the heart and soul of Puerto Rico is nestled in the sands of Orchard Beach.

Maritza Lopez is a recent graduate of Lehman College where she majored in English with a specialization in creative writing. She enjoys lively discussions about philosophy, literature, and television, was a recipient of the John W. Wieler award in 2015, and wrote a play that has been adapted for the Lehman stage.