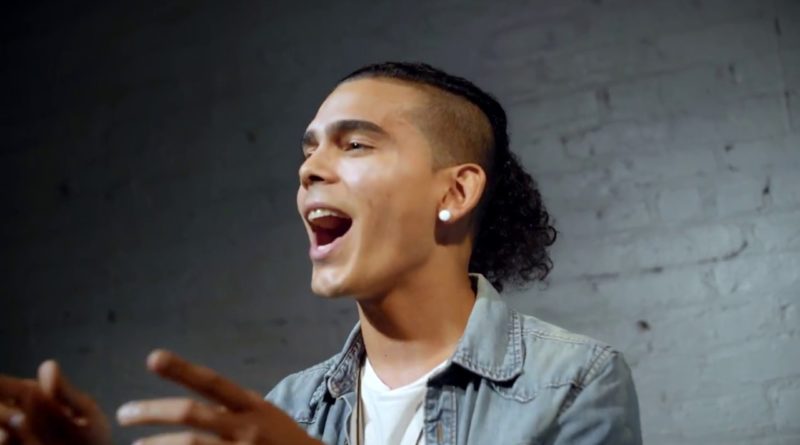 “The Bronx been burning and you’re all pr-pr-prone to Alzheimer’s!” (Quiñones, “The Get Down,” 1:28). Whenever people think of the Bronx, they only remember when the buildings were burning in the 1970s and communities were extremely impoverished. It’s as if they had, as Quiñones suggests, “Alzheimer’s.” They forget that this is the borough that birthed hip-hop, which continues to influence an entire generation and culture. They forget that the Bronx is full of people who are brilliant, creative, motivated, educated, and talented writers. Noel Quiñones, a young Afro-Boricua author, performer, and educator from the Bronx, reminds us of what we overlook with this limited view of the Bronx. Quiñones uses his poetry to teach about Latinx culture, his familial struggles, and the Bronx being a place of innovation.

The twenty-six year-old Quiñones grew up in Norwood, a neighborhood in the Northwest Bronx. He has had fellowships from Poets House, Watering Hole, and Candor Arts, just to name a few. He is also the founder

of Project X, an arts organization based in the Bronx that supports the artistic community. His work has been showcased in The Huffington Post, Vibe, Latina Magazine and Button Poetry. In part because of his age, but also because his work crosses multiple media, it is not compiled in one place or anthology yet. You can find it on YouTube, in literary magazines, and on his personal website.

Quiñones’ poetry often focuses on Afro-Latinidad, a term that refers to a group of U.S. individuals of Latin American and African descent who share a common way of life, yet whose African ancestry is often denied or mitigated. Quiñones explores this too-frequent denial of African roots in “Carving/Tuning,” when he writes, “Of course, I know that Puerto Ricans come from Africa / I know that / That’s why we framed the history of our last name on the wall / It has our family crest from Spain / Isn’t it beautiful and bleached and half a bloodbath amnesia / Remember how important it is to know all of your history?” (00:56-1:06). Quiñones uses sarcasm here to critique colonialism and its tendency to whitewash Caribbean genealogies. “Bloodbath amnesia” is important because some Latinxs take pride in their Spanish bloodlines but forget that Spanish colonization sparked slavery, disease, and the mass murder of millions of Native Americans and Africans. Just as Quiñones noted that people can be “prone to Alzheimer’s” when it comes to recognizing the cultural prosperity of the Bronx, not just its poverty, people also have “Alzheimer’s” when it comes to acknowledging the negative effects of colonialism. Many Latinxs suffer from a kind of amnesia about their African ancestry, a memory failure Quiñones’ spoken-word poetry is designed to correct.

While Quiñones proudly embraces his own African ancestry, family members, whose voices appear in his poetry, can be less receptive: “Heard you’re calling yourself Afro-Latino now / How’s that working out for you? / I mean I’m just confused / I just don’t know where all this black stuff came from / It’s so sudden you didn’t grow up like that” (1:10-1:18). These lines focus on the intergenerational difference of opinion about the embrace of blackness among many Latinxs. Older generations were taught to discount or even repudiate their blackness because they thought it took away from their Latinx experience and heritage. The more Latinx you looked, the “purer” and more privileged you were. The new generation of Afro-Latinxs refuse to be confined by the binary of Black and White because they explode the idea of being one or the other but never both. This new generation sees their blackness as a prideful part of themselves and their culture that they will not ignore. For Quiñones, in particular, Afro-Latinidad is a means to connect with his African and his Puerto Rican heritage. It is a means to understanding that “the difficulties surrounding what we call ourselves reflect the complex histories of Africans and their descendants in the Americas” (Jiménez Román and Flores 1). In other words, it’s a way to understanding not just the whitewashed side that gets publicized in the media and often touted by family members, but the African heritage that Latinx people, especially Latinxs of Caribbean descent, have and should acknowledge.

As shown in the spoken-word poem “We Left the Bronx for a Reason,” Quiñones and his father clash over understanding one another’s point of view, and generational differences act as a barrier to empathetic communication. The Bronx is the focal point of their disagreement. “That’s the Bronx I know,” says his father in the poem. “The history I buried that you want to play gravedigger to.” The poet’s father sees the Bronx as a place never to go back to. The sacrifices he made to get out of the rough-and-tumble Bronx were done so his son would never have to know the same hardships of poverty, losing family members to the streets, and prison. Quiñones, on the other hand, sees the Bronx of today as a place of culture and creativity where he can connect the dots of his past to better understand the future. Here is the poet’s father talking about the Bronx as a place of heartbreak and struggle:

That’s the Bronx I know.
The history I buried that you want to play gravedigger to
You ever notice how every family history ends with someone talking about things they don’t know anything about?
So, keep ignoring me if you want
But ask your cousin about forgetting
Your tío about forgiveness
Or better yet ask your grandmother’s memory clinging to loose rocks in a good river. (Quiñones 1:21-1:47)

Mr. Quiñones believes his son is playing “gravedigger” to a past he buried. Not only is that past buried but so is a side of the poet’s family he never knew. His father is not trying to be cruel but honest. Honest that the Bronx he knows and that his son knows are completely different. He, as well as the poet’s other family members, have given pieces of themselves to the Bronx. Consider the irony of the poet’s uncle being saved from the streets only by a car accident or his father being so hungry that his bones would shake. The poet’s family members went through this so he would not have to. Yes, the Bronx gave them a lot, but it seems to have taken away more than it gave. By showing empathy toward his father’s view of the Bronx, Quiñones is using poetry here to teach about familial struggles. He illustrates how coming to understand heritage and culture is not easy and can lead to intergenerational conflict. What’s more, everyone’s experiences and views of the Bronx is unique. What may be the honest truth for one person can be a trigger from the past for someone else. Poetry can help instill the empathy required for mutual understanding. Through empathy, the poet and his father are able to come closer to an understanding of the Bronx and themselves.

In an interview with Quiñones, I asked him about his relationship with his father. He told me that “my relationship dynamic with my father has been the best it’s ever been. A lot of that has to do with me growing up to be honest.” Growing up allows us to see different concepts on a larger scale. It also allows us to gain empathy. “Empathy” according to one researcher, “usually comes down to … setting [one’s own experience and conception of self] aside and seeing experiences” from another point of view (Hollan 478). To truly understand or relate to someone is not putting your experiences on another person but acknowledging the other person’s struggle in the context of their time and place. We lack this trait at times because we focus too heavily on making sure we are understood. From speaking with Quiñones, I gather that his awareness of his father’s struggle is evolving now that he is an adult. Empathy, expressed in poetry, allows the listener or reader of Quiñones’ work to understand that there are many “Bronxes” and many legitimate ways of seeing our borough.

Continuing my conversation with Quiñones via email, I asked, “What do you hope your voice, poetry, and work will accomplish and portray in years to come?”  He explained that he wanted “to make children of divorce feel seen and understood using my own narrative concerning my first book of poems.” He also wants to write another poetry collection that will focus on the Borinqueneers. They were the first all-Puerto Rican military battalion in the United States. Summing up, Quiñones made the following remark, which stayed with me: “That’s what I want my work to do, teach people about Puerto Rican History while enjoying the art of poetry.” As I understand it, Quiñones is using poetry as a method of educating as well as a technique to relate to others who share similar experiences, but also to aid others in appreciating the art of poetry.

I’ve seen Quiñones perform live in the Bronx. If you haven’t seen him perform, the elements of his performance style are apparent in the video “8 Confession of my Tongue.” You can see the strength and urgency in his hands, and yet, you can also see the softness in his eyes and hear the richness of his tone, all of which lends his art great visual appeal. Quiñones’ performances focus on word-play and the beauty of storytelling. He speaks from his own life experience and is animated by the hope to inspire, to educate, but most importantly, to be relatable. The focal point of much of his poetry is, as I explore above, the dynamic between him and his father and his status as a new-generation Nuyorican poet connecting with his roots.

As a Nuyorican poet standing on the shoulders of those came before, Quiñones is honoring a legacy and creating his own. His work is dedicated to voices of the Bronx, especially the Latinx ones. His is a brave poetry, seeing and wanting better for a people who are rarely written or talked about in literature. It is the Bronx attitude expressing the view that we don’t need a Netflix show, The Get Down, to prove we are innovators; we are born visionaries. I love what Noel Quiñones is doing with poetry and writing. He sees past this narrative that there is nothing good that comes from the Bronx. He sees how important representation is for minority peoples that come from where he does. This interests me because, as a writer myself, I don’t see a lot of other writers that reflect me or where I come from. If you don’t see yourself in literature, you have to write yourself in.

Hollan, Douglas. “Being There: On the Imaginative Aspects of Understanding Others and Being

Quiñones, Noel. “The Get Down.” YouTube, uploaded by Write About Poetry, 19 December 2017, youtu.be/TvoGWzeTQg4.

Quiñones, Noel. “We Left The Bronx for a Reason.” YouTube, uploaded by Write About Poetry, 30 January 2017, www.youtube.com/watch?v=CV7ge2p-YN8

Davaughn M. Riley is an English Honors Professional Writing major with a minor in Philosophy. His goal is to so show how literature can be used as a tool to illustrate self-discovery, familial struggles, and heritage/culture. Lastly, to always remember.