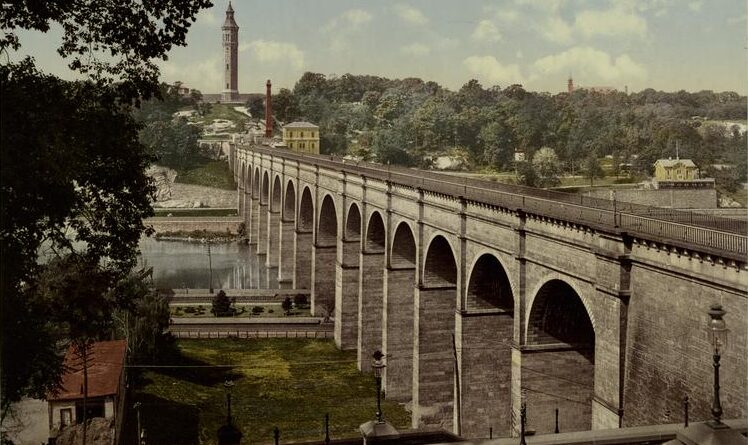 When reflecting on her childhood, author and former Queens College professor Maureen Waters has these verses stuck in her head. In her 2001 memoir, Crossing Highbridge: A Memoir of Irish America, traditional Irish songs like this one are the constant backdrop to family conversations and homelife. The wistful lyrics of “’Tis the Last Rose of Summer” help Waters’ family keep memories alive and stay connected to their ancestral past. Waters’ father, in particular, would regale the family with stories about their forbears in Ireland. In their home county, the male head of the Waters household had served as the combined doctor, schoolmaster, carpenter, lawyer, and jack-of-all-trades for their town. Maureen’s father was to have inherited this role, had they not moved to America. But, by the 1940s, the Waters family felt forced to immigrate—the hardship of life in Ireland was too much. “These stories,” Waters writes, “made a deep impression on us as children, linking us firmly to the old country…. We were early made aware of the perilousness of that old life” (26). Through storytelling and faith, Waters’ family remains deeply rooted to the old country, yet the stories themselves helped the children appreciate their more secure upbringing in New York City.

Growing up in the Highbridge section of the Bronx in the 1940s and walking along University Avenue, Waters felt like she knew everyone. Every house was reminiscent of County Mayo, with smells of stew, and the sounds of fiddles spilling out onto the avenue. On the other hand, on nearby Ogden Avenue, you could see sights that had never existed in Ireland: Scandinavians, kosher butcher shops, and even the High Bridge walking bridge at 170th and University Avenue, which connected the Bronx with Manhattan. Here, on Ogden, it was definitely not all Irish rosebuds or last roses of summer left to bloom. In the 1940s and ’50s, Highbridge was a melting pot of Jewish, Irish, and Scandinavian families, all helping create the complex tapestry that is the midcentury Bronx.

Crossing Highbridge describes how Waters’ parents played unique roles in her upbringing—her traditional God-loving and God-fearing mother and her father, a man just as comfortable fixing a car as he was baking a cake. Waters’ father’s bent for storytelling and poetry, in particular, seeded her own vocation as a writer. Her father always had a ready supply of stories and poetry to accompany the evenings chores. He would recite “The Lady of the Lake” while peeling potatoes and used other pieces by Walter Scott as an incentive to get housework done. Waters’ mother had a different strategy when it came to struggles, often adorning her hardships with proverbs and common verse.

In charting her own literary and academic path, Waters could lean on her father’s poetry and storytelling and her mother’s verse, but she also had the Church. The strict nuns who taught her at the Sacred Heart School, still located today between 168th and 169th Streets on Nelson Avenue, and the Catholic Church blurred the lines between the old country and the Bronx, between the past and the present, between storytelling and reality. As Waters writes, “Growing up in the Bronx, I was never altogether certain of boundaries between the old country and the new or between this world and the next. The deeply held Irish and Catholic convictions of our parents permeated our day-to-day lives. Our home had its icons, familial and spiritual; family myths blended with those fostered by religion.”

Beyond the influence of the church, two stories of errant sons loom large in Crossing Highbridge. First, her father’s brother Michael’s death in Ireland at seventeen. When Michael, who fought for the Irish republican cause, died, Waters recounts, “he was buried secretly in an unmarked grave—his name still on a list of wanted men—because the family feared reprisals.” The second death, of Waters’ younger son, Brian, in 1992, haunts the memoir. Brian was a rebellious child who fought against the establishment represented by his family, city, and country. By the tender age of fourteen, he was already hitchhiking and stealing, a trend that continued until his death in Chicago in his early thirties. He “rejected the world he grew up in,” writes Waters, “tattooed the biceps on both arms, dressed in shabby black leather and a biker’s cap.” Her son’s death shook Waters to her core. In poring over Brian’s life in her memoir, she hopes to find an answer as to why he died, perhaps even where she went wrong as a mother. Though it took time for her to find peace, it was in doing so she came to understand the difference between his upbringing and her own: “the fact that the immigrant experience was so new,” she writes, “made the crucial difference in my childhood.” This perspective of being a newcomer in America was an experience her second-generation American son never had; it was perhaps what made him search so desperately for meaning and purpose in his short life. For Waters, the stories of the old country, of her father and mother, and her sense of faith were interwoven in the very fabric of her being—they were the source of meaning and purpose—and it was all nestled in Highbridge.

The interweaving of storytelling and Catholic faith were not unique to Waters’ Bronx home, block, or even neighborhood. The importance her family placed on these ideas as well as the blurring of the familial and spiritual realms was not unfamiliar, either. These twin pillars of Waters’ life stretched across the Bronx, gaining a foothold on every avenue and street corner they could. In 1945, for example, it was an upbringing like Waters’ that set the stage for Joseph Vitolo, Jr., a nine-year-old Italian-American boy, to declare he saw the Virgin Mary in the Kingsbridge Heights section of the Bronx. Hundreds flocked to meet Joseph, to see the visitation site on Villa Avenue, even to worship at Saint Philip Neri Church just a few blocks away. At the height of Joseph’s fame, more than 25,000 people made the pilgrimage to the Bronx for a possible sighting of Mary. Although unmentioned in the memoir, it is easy to imagine that members of Waters’ could have been in the crowd.

Waters’ memoir has been compared to the work of other Irish writers. An early review of Crossing Highbridge suggests that “in the background of Waters’ youthful struggle between the spirit and the flesh is the voice of Yeats’ Crazy Jane. Touches of Joyce’s Portrait of the Artist as a Young Man are evident when she relates her first memory as a dreamlike sequence.” Her writing resounds with echoes of Irish storytellers whom everyone in her Bronx home would have known and admired growing up.

For me, reading Crossing Highbridge was like looking at my own life through an old window. Growing up in the Bronx, I have memories of my father using storytelling and faith to resolve nearly every problem, in particular, trying to get my brother and me to sleep as boys. After prayers and sending out a “God Bless” to every relative, friend, and godparent, when the lights finally went out, my father would remain standing by our beds and continue telling us stories of his own childhood in the Bronx. Some of these stories had the opposite effect that they were supposed to, as they kept me awake long past bedtime. My father would tell us how, as a child, he used to lie awake in his room, listening to the cars whooshing past his apartment building and watching the church bells cast shadows on his bedroom floor in the moonlight. Dad would talk about walking back from school every day and playing stickball in the schoolyard after mass on Sundays. An almost fantastical element crept into my existence on those nights—these were the streets I knew; this was the church I attended. In small moments like these, I had ties to our “old country,” the Irish-American Bronx of thirty years before. Unlike Waters, I was not the child of new immigrants. However, storytelling was just as important—it permeated every piece of my life.

Crossing Highbridge: A Memoir of Irish America offers the reader a view into the life of the child of immigrants in the Bronx, the life of an Irish American at midcentury, and life in general. Though at times digressive, Waters’ method of recounting her grief and struggle to push on despite the death of her son Brian is sobering and inspiring. Her most interesting writing emerges on the subject of storytelling and faith as staples of Irish-American life. Tens of thousands of Irish grew up in the Bronx during the twentieth century. Waters’ father’s story of losing siblings to brutal farm life and coming to America for a fresh start was thus not an uncommon one. Her understanding of her grief and troubles through the lens of faith and storytelling was also typical. Yet these first-hand accounts of how that generation of Irish Americans changed the borough, and how the Bronx changed them, are important to read. For those of us invested in the literary record of the Bronx, the high concentration of Irish Catholic storytellers who lived in the borough over the course of the twentieth century have placed these stories in our laps.